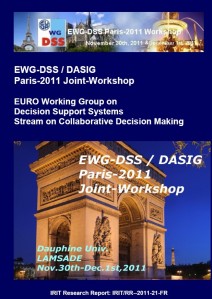 The EWG-DSS is very pleased to announce that the “EWG-DSS Stream on Collaborative Decision Making” of the EWG-DSS / DASIG Paris-2011 Joint-Workshop, to be held on November 30th, 2011, has attracted the  participation and the interest of many  professionals of the decision-making research area.

The Workshop comprises two Streams. On Day 1 (Wednesday, Nov.30th, 2011), there is the EWG-DSS Stream on “Collaborative Decision Making ”(EWG-DSS_Stream Program), including 2 invited speakers presentations and 14 papers short presentations related to various aspects of Decision Making approaches. On Day 2 (Thursday,Dec.3oth, 2011), there is the Stream on “Policy Analytics” organized by the DASIG Decision Analysis Special Interest Group from the British OR Society (DASIG Stream Program), including 9 presentations and 1 plenary discussion about the topic of Policy Analytics.

The special  talks of the EWG-DSS Stream on “Collaborative Decision Making ”will be presented by Denis Bouyssou , a Senior Researcher at the CNRS in Paris, about the topic:  “Should you believe in the Shanghai ranking ?”; and Sihem Amer-Yahia, Principal Research Scientist at Qatar Computing Research Center, who will speak about: “Social Analytics to Encourage Collaboration on the Social Web of News”.

We are extremely proud to be able to co-organize jointly with the DASIG and CNRS-LAMSADE  such an interesting event.

If you have not yet registered, we take this opportunity to remind you to make your Workshop Registration via: http://www.lamsade.dauphine.fr/dssdasig2011/. Thanks.

We are looking forwards to welcome you in University Paris-Dauphine!

Paris, get ready!  Here we go!

The EWG-DSS invites you to participate in our second Meeting & Workshop in 2011, which will take place in Paris.

This time, the EWG-DSS organizes jointly with the  DASIG  Decision Analysis Special Interest Group from the British OR Society and CNRS-LAMSADE the “EWG-DSS / DASIG Paris-2011 Joint-Workshop”, which will take place in Paris Dauphine University in France, in the period of November 30th to December 1st, 2011.

The EWG-DSS Coordination Board is very grateful to the support received from our colleague and EWG-DSS founding member Alexis Tsoukias from LAMSADE, in organizing this meeting in Paris Dauphine University.

Following the success of the “EWG-DSS London-2011 Workshop″, the main purpose of this Joint-Workshop is to provide an informal setting in which the participants, from both EWG-DSS and DASIG groups, can have the opportunity to meet and discuss technical, methodological and social aspects involved in the development of Decision Systems.

For the EWG-DSS Stream on Collaborative Decision Making, members of the EWG-DSS working group are expected to participate and to encourage the participation of other related professionals, so that further collaboration can be promoted on a larger scale.

Details about the Participation, Program and Registration of this Workshop will be continuously updated in this web-site ( follow the links: About, Call for Papers, Program & PC, Registration) and in the other  EWG-DSS Web Platforms.

We thank you in advance for your participation interest.
We hope to see you in Paris!